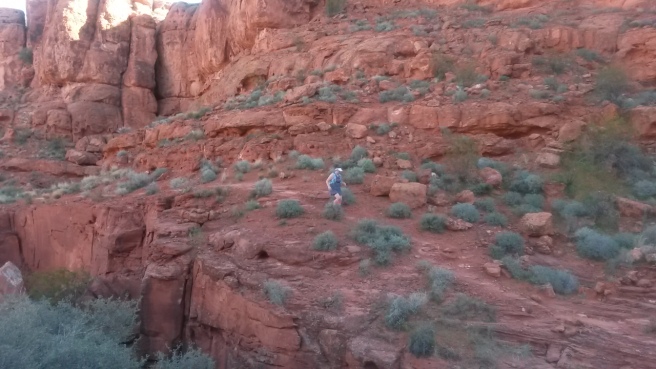 I know this topic is likely to be too obscure for some folks. I’m really writing this for my ultra running friends. Hoping to start a conversation or get their help in making some connections or get your thinking on this topic…

For me, ultras and Binge Eating Disorder (BED) are inextricably and pretty wickedly connected. From the first ‘Holy shit, could this really be what’s happening?’ moment to the ‘Wow. Makes sense even though I detest the idea…’ moment it took me about 6 months to puzzle it out.

The information I can find about Eating Disorders are mainly about Anorexia or Bulimia. Like this great read from Trail Runner Magazine which covers a whole lot of valuable ground. Yet, I can not find anything about the ties between ultras/endurance and BED specifically. I can’t be the only one dealing with this. When you mesh the Google ‘percentage of U. S. population…’ stats of ultras at .5% and BED at 3%, statistically, I still don’t think I can be alone in this mess.

What forced the issue? An acute episode of BED rearing its ugly head along with a planned off-season/down-time from running. (My blog about it is here…)

Running was no longer there to hide behind.

I was hiking one day and was gobsmacked with the realization that I was using running to hide/feed the BED. It was this nasty, covert, and destructive cycle that I couldn’t really see because I was so deeply in it. I wasn’t running from something or even too something.  I was running FOR something.  And not for something good or worthwhile or sustainable.

I stopped in my tracks.

Sat my butt down on the side of the trail and wrote some notes on my phone while a newt cruised by to see what I was doing.

Here’s what I wrote on my phone: “I love long runs and hate tapering. I run long (5+ hours) and I have ‘permission’ to eat anything and everything in any quantities I want.  When I taper, food gets restricted, weight creeps up. I run long, eat how I want and basically don’t get ‘caught’ bingeing because the huge volume of food I’m eating is ‘acceptable’. Tapering unleashes sneaky-ass behaviors that I thought I’d banished once and for all. Including lying about food.’

BED brain thinks about food as an acceptable/necessary/urgent replacement for something missing or to fill an emotional need.  This has NOTHING to do with hunger.  Not.a.single.thing. For me food can take the place of damn near every emotion on the spectrum.  I’m just as likely to eat that emotion in the form of trail mix as I am to actually feel and experience it. No amount of cajoling/shaming/lecturing can fix it.  I’ve often said ‘pizza was never mean to me…’   When you have THAT kind of relationship with food you need professional help.

I was ready to face all of this and not ignore it or hide it anymore. Scared shitless, but ready. I needed help beyond caring and concerned friends. After muscling my way through the post-acute phase of intense blues / shame / depression / anxiety / hopelessness / panic that lasts for several days after a binging episode…

I got into therapy.

My brand new therapist immediately, like first 20 minutes of first session, said running was an issue. I immediately told her she was dead wrong. Not politely.  I was rude and defiant. Defiance is my go to when I’m ashamed and someone’s getting close to the reason for the shame or embarrassment.

I flat out denied the connection. I lost 200 pounds, reversed Type 2 Diabetes. Running had SAVED me. Who the hell was this woman to say running was part of the current problem? Was she not listening to me? ….

The therapist quickly said we could agree to disagree about the role of running in my eating disorder. We would focus on other things. {Smart ploy…} That lasted two sessions.  I began to honestly assess what I was doing and why. Journaling impulses, noting emotions and starting to make tentative connections between feelings and food.

Damn if she wasn’t right…

Writing everything down it was impossible to ignore the connection. Running sat smack in the middle of the BED pile. It was about 2 sessions in where I had to concede she had a point.

More than a point. Ultra running was the 500 pound gorilla in the room.

I hadn’t replaced food with running.  I had used running to hide, enable and deny my BED. A crucial distinction. I hadn’t let go of ONE thing and grasped tightly onto something new.  I hadn’t given up anything at all.  I’d just masked what in the hell was really going on.

I think the college students I worked with would call that a HOT MESS.

Ultras and BED are married up in epically dysfunctional fashion for me.

As long as I ran long, I could pretend that eating 3,000+ calories at a single time after a long run was ‘normal recovery’.  Eating whatever I wanted for the week of a 60+ mile week was acceptable. I basically kept signing up for races to make sure I still had high mileage weeks and really full training schedules so that my bingeing wouldn’t be detected or life would seem ‘normal’ because of the training load and my food intake.

So what now?  Great question. I have some tentative answers.

I didn’t take on this whole lifestyle change to give up when things got hard.

I will be running again, soon, for all the right reasons.