Not my normal, guarded, stiff-legged bounce that I have used for the last three years when running downhill.

And no, it was NOT a dream.

HOLY SMOKES was it an amazing, unreal feeling to be flying down the hill on my own two legs!

I felt strong, solid, happy.  And well… I’ve never quite felt like that in all the running I have done up to this point.

I felt capable and confident. Those two words don’t get used a lot when I’m thinking about/talking about my own running.

Thursday night?  I nailed the downhill portion that I was working on.

All the pieces came together.  And something really important just finally clicked into place…

Back up for just one moment…  When I first started running it was simply about getting one foot in front of the other more than a few times in a row.  Like — very literally — the width of a driveway.  That was how I started my running career.  I was a walker, not a runner.  I was just dabbling with the idea of running and not sure I was even going to like it.  So I didn’t tell anyone I was trying to learn to run just in case I tried it and hated it.  Then I wouldn’t have to explain it to anyone. 🙂

Some days putting one foot in front of the other is still very much the goal.

But I am to a point with running where I want to work on some specific techniques, and learn some new skills. I am working on the parts/pieces/things that are going to help me keep running for years to come. The things that will help me avoid injury, run faster, run longer.

This is the really FUN stuff to be learning.

This is the hard work that I don’t mind doing.

Spencer and I were running off of McCullough Peak Thursday night. Spencer was running with me and he said we should work on some downhill running.

I have a short, choppy, guarded gait.  Especially on the downhill.  I’m kinda/sorta afraid/terrified of falling on my face. My gait shows that I’m guarding with every single footfall.

I tend to hit the ground and use my legs as shock absorbers — NOT springs.

I should be using them as springs.

‘Running downhill is not really running, it’s more of a controlled fall.’ — Spencer

Spencer and I have been working on my downhill technique/skills/abilities for close to year. Last year in May at the Western States Training camp in California we realized that I really didn’t know how to run downhill very well.  We’ve been working on it ever since.

Spencer has tried all kinds of things to help me learn to run more smoothly, efficiently and comfortably downhill.  We have talked about cadence, gait, stride – we have worked on core strength and building all the right muscles. All the things that I should be focused on to help make my downhill running (running in general) better.

So why was this run different?

I don’t really know how to explain it except that the words Spencer said clicked and something FINALLY made sense.

For a split second my legs understood what my brain seemed to refuse to comprehend.

And then you know that moment when your brain gives a big sigh of relief because you finally, finally understand something with perfect clarity?

This was one of those moments.

We were running downhill.  Me short/choppy, jabbing kinds of strides and Spencer says ‘open up your hips’.

I asked him what exactly that meant.

Spencer says try running from your hips, not just from your legs.

Those words made sense to me…

I took a few more steps that were short, stiff. Then I tried striding out with my hips ‘open’. My glutes were engaged in the whole process (hello butt!).  It was very suddenly NO LONGER just about my legs and knees…

All of the sudden I was really moving comfortably down the hill.  Faster, efficiently, with my legs more springy.

I felt really strong and confident and fluid.

I was mostly keeping up with Spencer on the downhill, which NEVER, ever happens. 🙂

I can only imagine some of Spencer’s frustration/elation/satisfaction given that THIS is what he has been trying to get me to do for about, oh… 8 months now.

That night, for some reason, the words and directions he gave me while we were running downhill FINALLY made sense to me.

And I felt like a freaking powerful runner for the first time in a long time.

Actually, maybe, I finally felt like a powerful runner for the very first time.

It just felt so damn good to fly down the hill with confidence.

The most impressive part to this .75 mile stretch was the fact that Betsy finished the last .25 mile at a 6:15 pace. The fastest I have ever seen her run, ever, is right around an 8 minute pace on downhill.

I was asked this exact question several times this weekend. Hanging out with 2,000 high school students means some honest, blunt questions. 🙂

It’s been over a year since I wrote this blog, I thought it might be time to share it again. Enjoy! 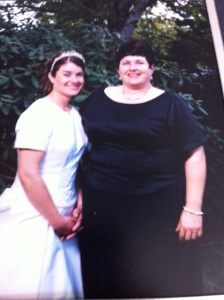 How did I get that fat?

The 5-second answer is embarrassingly simple. I ate too much and I hated to sweat.

The layered, nuanced answer requires you to peek inside my flawed thinking. And yes, I am nervous about opening this particular set of doors, thank you for asking. But it’s time to be honest.

Here is the how I got to be 392 pounds before I chose to do anything about it: